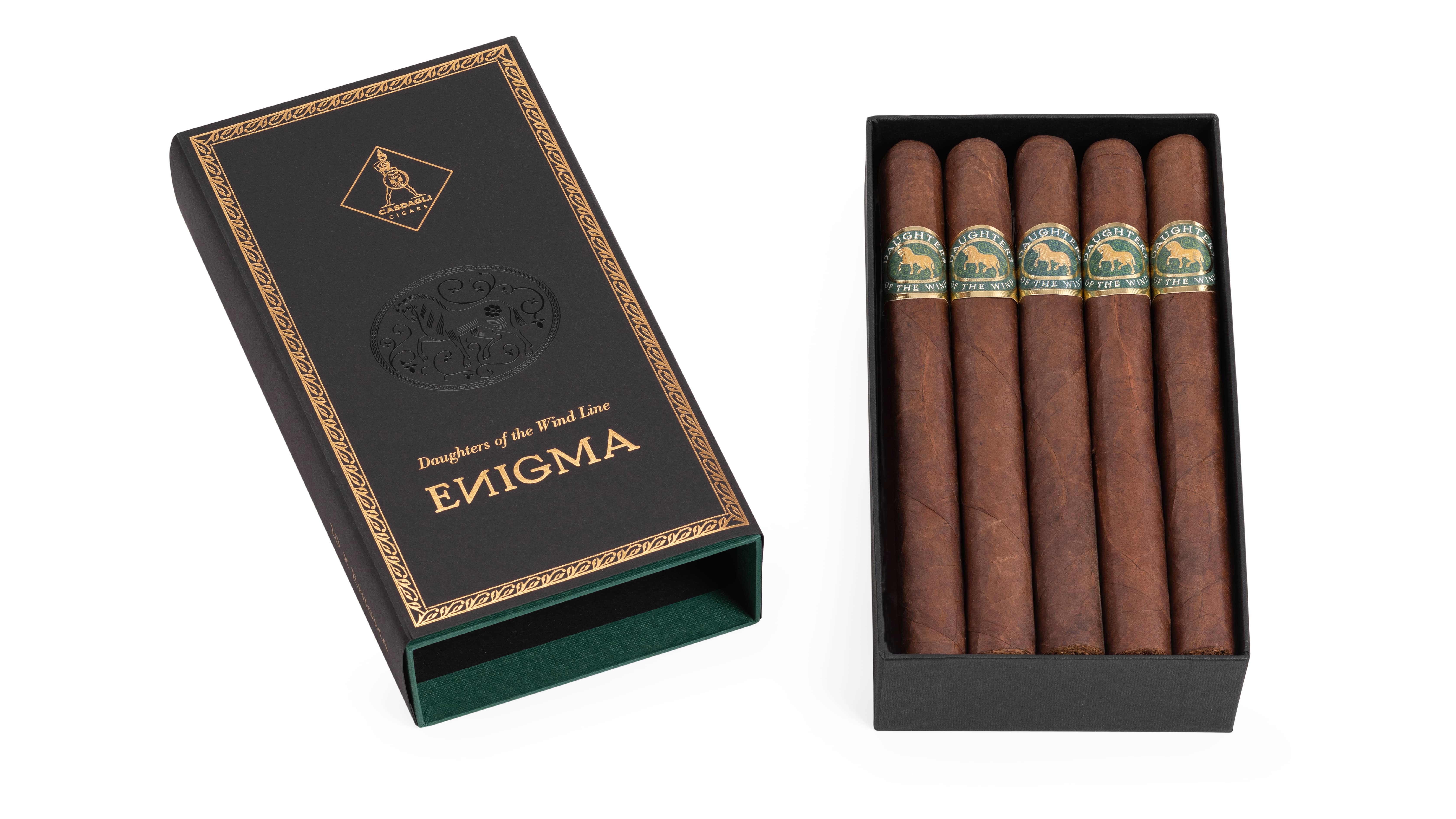 Casdagli Cigars launches a puzzling cigar called the Enigma. The Enigma will be part of the Daughters of the Wind line up. The cigars for this release were rolled 6 years ago. Jeremy Casdagli, the Founder of Casdagli Cigars, believes the Enigma has all the qualities of a cigar the made him want to create his own cigar brand. The origins of the tobaccos used in the Enigma are left “enigmatically” undisclosed. The details released show a Double Corona sized cigar (49 x 193 mm/7.6 inch) with an Ecuadorian wrapper.
“When laying these Double Coronas down to age 6 years ago, I wanted to limit this production to only 2000 exclusive cigars. The DotW Enigma is a blend that joins both my past and current journey in the world of premium tobacco,” explains Jeremy Casdagli, the Founder of Casdagli Cigars, the birth story of the Enigma. “My favorite cigar in the mid-1990s was the Hoyo De Monterrey Double Corona. You can look for hints there. Enjoy the smoke, enjoy the history,” adds Jeremy with an elusive wink.

Woody Ghsoubi of Club Mareva Beirut said in the press release about the cigar, “A classic vitola using very difficult to get filler tobaccos that took over 5 years to create is definitely a  proposal one can not refuse. Maybe one of the best Double Coronas I’ve ever had – a well-aged beautiful smoke with lots of aroma. We have decided to team up with Jeremy on this joint-project to offer some of the rarest blends that can be created by any manufacturer. In fact, no one can recreate it.  The filler tobacco will remain enigmatically undisclosed and won’t even be shared within our circle.”
The initial release of the Enigma will be a very limited 2,000 cigars. The cigars were made at the IGM Boutique Factory in Costa Rica and will come in 10-ct boxes. Enigma will see regular production later in 2021, with a total of 4,000 made per year thereafter.  The Enigma will be available in December 2020 initially only in Club Mareva Beirut of Lebanon. There are plans for some of this release to arrive outside of Lebanon.
Leave a Reply Cancel Reply
Login to CigarsLover Magazine
Reset Password
Enter the username or e-mail you used in your profile. A password reset link will be sent to you by email.