Shaken, not stirred. Thanks.

Entering a bar is not unusual for our attention to be captured by the organization of the drink creation desk, and by the varieties of tools which are required in the art of mixing. Getting closer to the desk, one is always attracted by ice and shaker. Ice should always be kept visible, in great quantity and with a nice, eye-capturing shape, since it evokes desire and sensations, so much that it is often defined as “hot”. 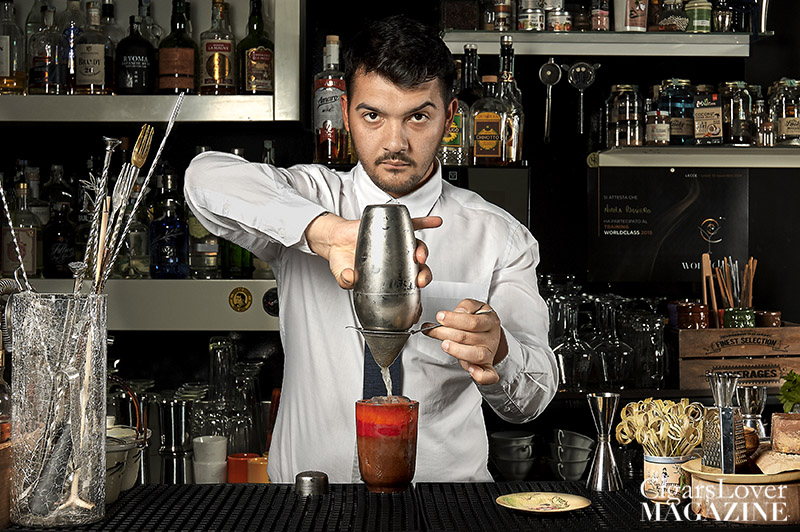 Ice is synonymous of drinks, cocktails… shaker. The shaker has a long history, a bartending protagonist, and every barman owns at least one to whom he is particularly devoted, independently from its usage. The word shaker comes from the English “to shake”, which means to agitate. Several different shapes, dimensions and materials ones are today sold. Technically it allows to cool down, dilute and emulsify liquids which are different in nature, texture and specific weight.

With proper exceptions, there are some recipes which, even though normally prepared with the mixing glass, are requested to be prepared with the shaker. Just an example: do you remember the Martini “cold, shaken not stirred”? 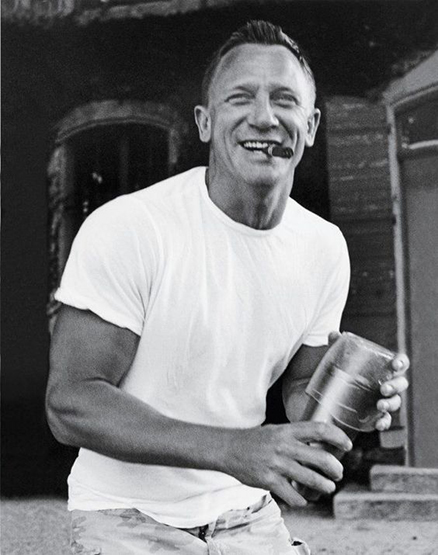 The currently commercially available shakers are the classic shakers, also called continental ones, the 3 pieces cobblers (one container, one filer and one cap), the two pieces parisiennes with no filter, and the Boston or American shakers, made of two parts, a metal and a glass one fitting one into each other. As for many other tools it is difficult to certainly state who has been the inventor, however we can consider it an American invention.

Its European spreading is due to the arrival in the hotels of American bartenders who, during the US Prohibitionism on alcoholics, moved to Europe, or joined large cruise ships. The famous Jerry Thomas, also known as “The Professor”, was a renowned barman of Metropolitan Hotel in New York and of the Planter’s House in St. Louis. In 1859 he was travelling around Europe with a set barman tools among which some silver cups he was using to prepare the Blue Blazer cocktail. The oldest doc registered at the US Office for Patents is dated 1872 and refers to the license to manufacture tools for the preparation of mixed drinks, released to New Yorker William Hernett.

The original two pieces cocktail shaker would be flanked by a three pieces one designed by Louis W. Rice in 1924, who during Prohibitionism defined it as “beverage shaker”. Both are still present today after a long evolution regarding shapes, dimensions and materials. In 1887 the Meridien Britannia Company from Connecticut presented in its catalogue six different dimensions of two pieces shakers. 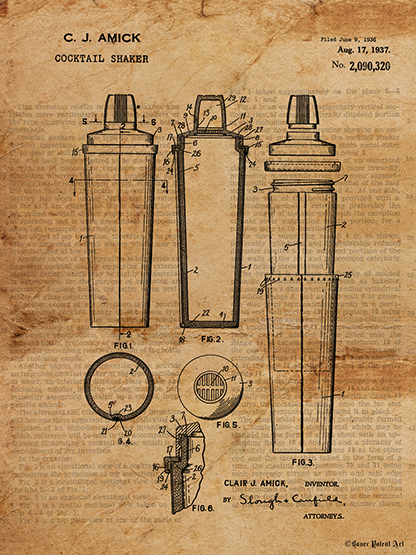 The metal three pieces shaker, today the most common, was immediately very successful. The first shakers were inspired in the design by the silver XIX° century English teapots and already in 1908 Harrods stores in London entered in their catalogues these new tools for the preparation of “mixed American drinks”. Great jewelries such as Cartier and Tiffany surrendered to the fascination of these tools too, and took on the challenge of creating some expensive and limited editions.

The success of cocktail parties, very trendy events in the private houses of the wealthy classes, was a continuation of the luxuries belonging to the major high level society happenings, becoming a social phenomenon influencing many aspects of human living, starting with fashion, interior design, novelty, up to jewelry and many more. Shaker quickly became a common use tool. The Martini culture, elevated at trend and social ritual level by the Americans was imported in Europe in its excess nature, further contributing to the shaker spreading.

Glass made its appearance around 1930, then followed by materials such as aluminum, Bakelite or plastic. Metals and precious materials such as gold and Chinese lacquer would then be used in very valuable oriental productions. In the ’50s, while the electrical blenders were appearing on the scene, and fridges were critical in the increase of wine and beer consumption, glass shakers were presented with refined and rich colored drawings. Today is not rare seeing old shakers shown or used in cocktail bars. Antiques experts such as Mood Indigo in USA or the Pullman Gallery of London feature pieces which are worth thousands of dollars.

Some shakers are included in museums. If you travel to London make sure to pay a short visit to the FDR Museum, where you can admire the beautiful silver shaker of President Roosevelt, engraved with palm trees, and supplied with its glasses, with which he prepared the first Martini in the White House at the end of the Prohibitionism.