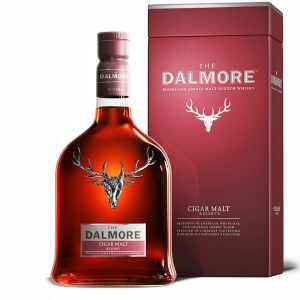 Tha aromatic palette of the Dalmore Cigar Malt delivers rich dark chocolate notes, that pairs together very well with the orange peel, even if the last are lighter. The chocolate aroma is a perfect match with the tobacco and the pairing get easy, at just one condition: you need to chose cigars with a high strength and with a remarkable intensity. If not, this whisky will overwhelm the cigar.

Cohiba Behike 52: the aromatic bouquet of the cigar and the one of the whisky pair perfectly, giving off a paring incredibly satisfying. Notes of cocoa and chocolate interweave together, invigorate by the spices from the Cohiba but at the same time refreshed by the orange peel from the Dalmore. A meditation pairing, needing the right attention to be completely enjoyed.

Padron Serie 1964 Imperial Natural: a paring as explosive as complex. The very structured Padron aromatic profile finds support in the Dalmore one, making the earthy and chocolaty notes melt together, followed buy the cinnamon and the liquorice, giving off a huge aftertaste. The black pepper from the Imperial invigorates the pairings, making every sip and every puff very fulfilling. The persistence is incredibly long.