Through the tasting, both the cigar aromatic profile and strength inevitably change. This phenomenon is called the evolution or the progression of the cigar.

What is the influence of the cigar purge on the tasting progression?

During their conservation, cigars are normally relatively at equilibrium; their temperature and humidity are pretty stable.

Affected by any small variation in temperature or humidity (or pressure) of their environment, cigars will automatically try to establish an equilibrium with their surroundings.

The lighting and the start of the tasting will bring the cigar in a more dynamic state. Our cigar becomes the actual place of complex modifications and exchanges, from the head to foot:

Seen the complexity and intensity of the transformations, the cigar logically requires a certain time – some sort of “warm up” – to acquire its tasting “cruise-speed” regime. Only then the full aromatic profile will be delivered at its best; the flavour profile gradually opening in the first centimeters of the combustion.

Later during the tasting and according to the blend, moisture, combustion regime and thus behaviur of the aficionado, each cigar will go through an evolution of its taste characteristics (aroma, flavour and strength).

In most cases, the apparent strength and the robustness of the aromatic profile will increase progressively throughout the tasting. In some cases, bitter and unbalanced notes can appear and become clearly unpleasant. Sometimes so irritating, this taste imbalance may force the cigar aficionado to give up on his cigar.

To understand the origin of the cigar aromatic richness composed of intensity and diversity of aroma families, three fractions or sources can be highlighted

These compounds build up in the body of the cigar and thus get re-burnt later. Product of a second combustion of heavy elements, these aromas are robust and bold. 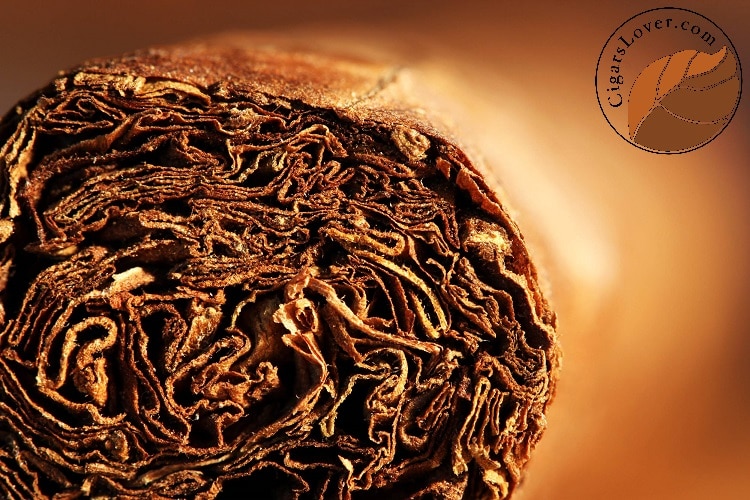 How to purge a cigar.

To prepare a cigar for the purge, ashes should be first removed as they could obstruct the passage of gazes between the cigar and the environment. Then a flame should be brought to the foot of the cigar – preferably a soft flame – progressively closer to the combustion area of the cigar. Once the flame is in presence, inspire slowly to activate the burning as to relight the cigar. Also this operation will heat up the gazes that are to be expelled soon; and make them a little more volatile. Then powerfully and continuously blow the longest possible puff of air into the cigar.

If the approach of the fire is well synchronized with the long and slow blow, the internal cigar gases will ignite in contact of the fire. A blue to orange and yellow horizontal flame will be very clearly observable at the foot of the cigar. This purge flame can remain for many seconds and interestingly even after the original source of fire is removed. The intensity, color, size and length of the purge flame can vary importantly in a case to case basis.

Alternatively, a cigar purge can also be done without flame with a simple blow that will push air through the body of the cigar, activate the combustion in excess and eventually eject the internal gases. The combustion of outgoing gases nevertheless offers the advantage to create a slight depression at the foot of the cigar that facilitates the whole process. Purging with a flame appears thus to be more efficient. 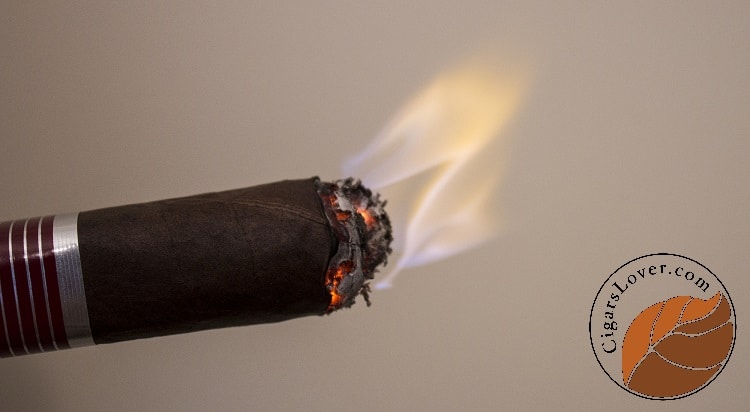 When to purge a cigar.

As for tastes and colors, purging is personal. Tasters will determine by themselves the right timing. And aficionados will answer this question based on their own feelings and – mostly – experience.

Generally talking, the stronger the aromatic profile of the cigar, the more important the purge can be. Also purging cigars seems beneficial for all type of aromatic profile; but the amount of time its positive effect will remain is all relative. Some cigars will seem to require numerous purges, whereas for other aficionados will only feel to purge once or twice over the whole cigar tasting.

A pragmatic vision of the cigar purge can be establishing an exhaustive list of moments when purging sounds particularly beneficial:

What happens during the purge.

Discerning aficionado focusing on the dynamic of a cigar tasting will observe a progressive evolution of the aromatic profile. Subtle or robust, light or strong, a cigar will always have an aromatic evolution. Our objects of pleasure actually always reveal a reinforced aromatic strength at the end of the combustion. This is due mainly to the “re-combustion aromas” – the tertiary aromaticity – that rise progressively with the tasting. This effect is due to filtration and depositions.

A well-performed purge will expel some or a majority of those elements responsible for the bold and heavy tertiary aromaticity. Therefore purging efficiently a cigar will readjust the balance between the “combustion” and the “re-combustion” aromaticities, and will allow the cigar to express more of its noble bouquet. Depending on the cigar blend, the quality of the purge, the conditions of humidity, the cigar will regain a certain freshness and aromatic complexity that was hidden by the growing influence of the strong notes of the cigar progression.

Purging can also slightly improve the cigar combustion. This sounds logical as the presence of gases reduces the air and oxygen concentrations within the filler leaves and thus their access to the combustion area. With the tasting being carried on, new smoke elements will logically start building up again in the cigar body, limiting in time the positive effect of the purge. Depending on the cigars characteristics and the tasting conditions, between 2 and 5 purges may generally be needed.

As choices and feelings are personal, the discussion of purge’s foundations can be debated; but purging clearly cannot be of any negative effect. Contrarily, the purge seems to be clearly beneficial for the cigar tasting.