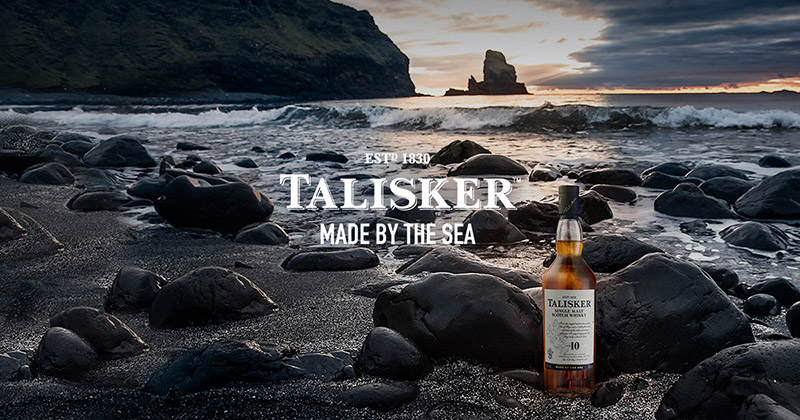 Made by the sea. The character of this distillery can already be understood from the company’s motto: a whisky produced on the Isle of Skye, one of the most remote, wildest, but also one of the most beautiful Scottish islands. The complexity of its products has reached the hearts of many enthusiasts, and it is possible to find the references almost everywhere, local or resale scattered in every corner of the globe.

History of the Talisker Distillery

The distillery was founded on the Isle of Skye in 1830 by two brothers, Hugh and Kenneth MacAskill, sons of the island’s doctor. After the death of both, the distillery goes to the North of Scotland bank, which, in 1857, sells it to Donald MacLennan for the sum of 500 pounds. After a few years, in 1863, MacLennan tried to sell Talisker due to the difficulties that arose in the production and transport phase. The sale was finalized only 4 years later by Anderson & Co., based in Glasgow. Mr. Anderson, owner of the company, was imprisoned in 1879 for having defrauded some customers with barrels that had never existed and had already been paid. The following year Talisker was acquired by two partners, Alexander Grigor Allan and Roderick Kemp. Kemp, in 1892, sells his share and acquires The Macallan. Thomas Mackenzie joins the company and remains the sole owner in 1895, when Allan dies. Before the end of the century, Talisker merged with the Dailuaine and Imperial distilleries, still Scottish. Mackenzie died in 1916 and the distillery moved to a consortium of companies, including DCL, the future Diageo, today still the owner of Talisker. The company history of the distillery seems to have ended, but there were several changes in the production phase. First of all, in 1928, the very expensive triple distillation is abandoned. In 1960 a fire caused serious damage to the production plant, so as to destroy the 5 stills that were rebuilt only 2 years later; in 1972 it was decided not to malt on the spot but to buy the malt elsewhere. In 1998 part of the plant gets renewed; in 2005 a celebrative product of 175 years of history was launched. The choice of bottling all the products at 45.8 degrees is also recent; previously the 25 and 30 year were left at cask strength. 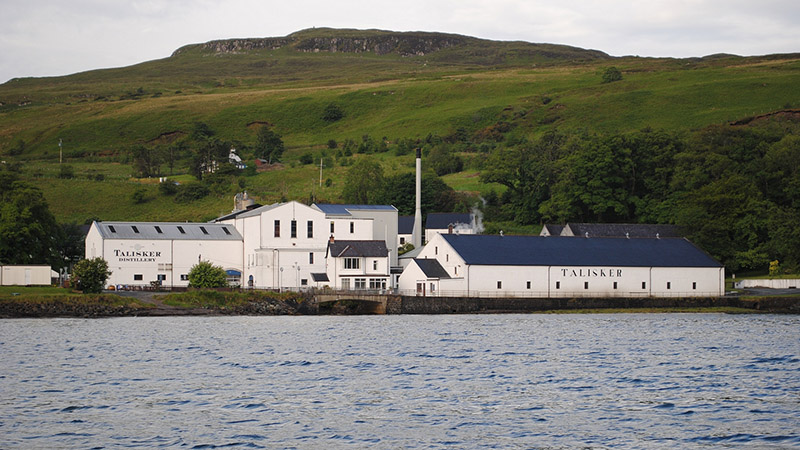 The range of Talisker products is quite extensive and can be divided between bottles with age indication and so-called No Age Statement products. In addition there are special products, part of the Diageo Special Releases, and some rare independent bottlings.

Core-range with indication of age:

• 10 years: the classic, solid, Talisker base malt. Youth mixes very well with the maritime and spicy characteristics of motherhouse. A          proud character therefore, tendentially constant from year to year and with different packaging changes.
• 18 years: a malt already with important aging. Compared to the 10, we find a greater complexity and roundness, a simple malt to be    appreciated in each of its variants.
• 25 years: it is the malt that perhaps embodies the greatness of this distillery, with its decisive notes and exceptional complexity. It benefited from the reduction to 45.8 degrees.
• 30 years: last product of the core-range, a malt that seems tamed by the many years passed in barrels, but in reality it always expresses itself at high levels. A product to try.
• Distillers Edition: a Talisker of at least 10 years that passes the last months of aging in barrels that previously contained sweet Amoroso wine. An experiment that every year gives a different product, with alternating results. 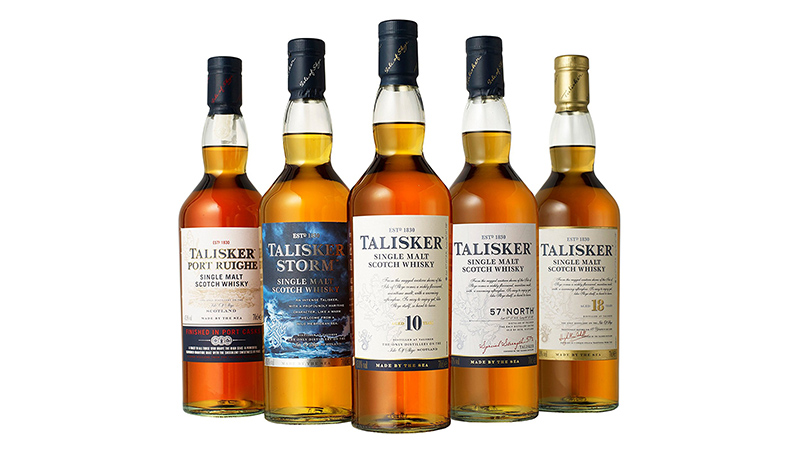 • Skye: today the best-selling product of the distillery, extremely easy to drink, very fresh and young. All the motherhouse’s notes can be tasted.
• Storm: this NAS should encompass the wildest spirit of the distillery, ensuring strong sensations for the most daring palates. Only half successful experiment.
• Dark Storm: initially released for the travel retail circuit, it is now easily available online. Compared to the Storm, it should give more sweetness and complexity, thanks to the very active barrels chosen during the construction of the product.
• 57 ° North: an important gradation of 57 degrees reminds us of the latitude of the distillery. Here we are more in line with the 10-year basis, although the strength is clearly different. To approach calmly, a still remarkable malt.
• Port Ruighe: this NAS passes the last months of aging in barrels that first contained Port. A unique feature, far from the classic Talisker, but not less interesting. 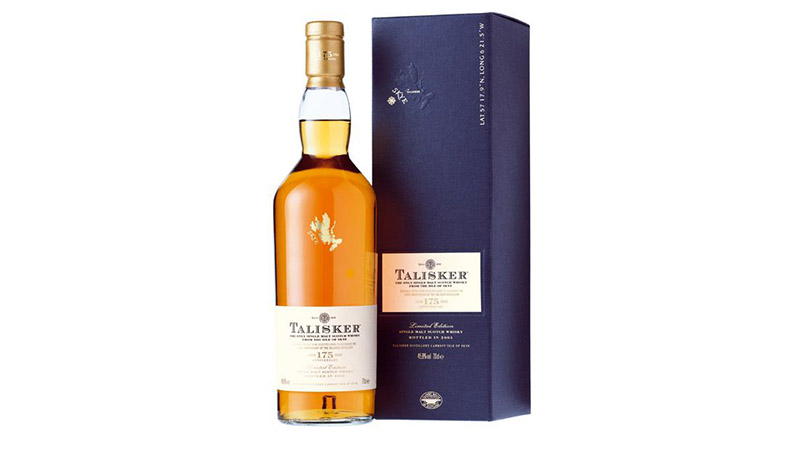 Special Release and other special editions:

• Distillery Only: released in 2007 at 53.9%, a solid and powerful product without lacking in complexity. Rather sought after nowadays.
• 175th Anniversary: ​​released in 2005 to celebrate the 175th anniversary of its foundation. Limited, a classic intense and deep Talisker, perfect to accompany a winter evening in front of the fireplace.
• 1985: released in 2013 after 27 years of aging. The demonstration of how the distillery, when put to the test, is still able to give great products. Intensity and complexity of the highest level, priced accordingly.
• 1981/2002: limited to 9000 bottles, aged entirely in ex-sherry casks, an unusual process for the distillery, this is, in the opinion of the writer and of many experts, the best Talisker of the last 50 years and one of the best whiskys ever. Today the bottle is worth well over 2000 Euros, so tasting it is almost impossible. If you stumble upon it, don’t mind the price: it is worth every single penny. 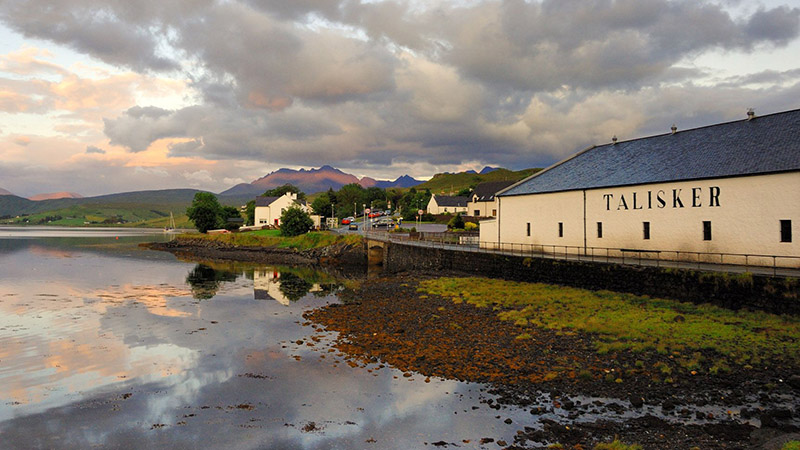