The Montecristo 80° Aniversario is a cigar released to commemorate the 80th anniversary of the most known Cuban brand.

It is commercialized in 20 counts boxes and the production is limited to 30.000 of them. 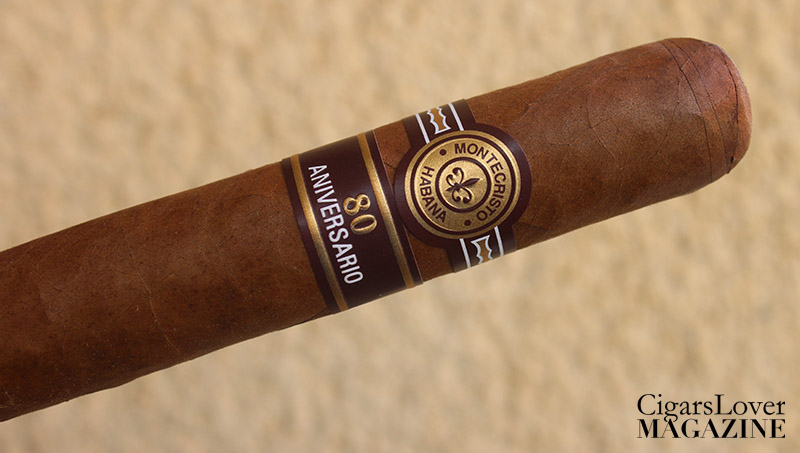 The cigar is dressed up with two bands, both made for the occasion. The first one has the brand name written on it, and the colors are inverted compared the the newst Montecristo’s bands: the golden is now on the background, giving it more glamor. The second band exhibits the celebration for the 80th anniversary.

Aesthetically is well made, with a generous filling. The wrapper has a colorado shade and it’s very smooth and silky to the touch.

Montecristo 80° Aniversario: before to light it up, it delivers wood scents. The opening is vegetal and acidulous.

The first third opens up with light notes of hazelnut. In the background are still perceivable the acidulous flavors present in the first puffs. There are then some earthy notes and the smoke results a bit on the dry side. Later on, light spicy aromas of black pepper get developed, but they are almost imperceptible. The strength is light (2/5).

In the second third, the intensity increases, but overall is still contained. Notes of walnut and hazelnut alternate, on an acidulous base. The cigar is still earthy in the aftertaste. Reaching the middle point, some piquant spices get developed. The strength now increases, overtaking the medium level by a little bit (3,5/5), but the aromatic intensity doesn’t follow it in the same way.

In the final third the piquant spices become more perceptible, followed by the usual earthy notes. The base is still acidulous and, in this final part, even more.

Overall a smoke which doesn’t worth a lot of attention. The evolution is linear and the aromatic intensity almost unperceivable. In the second half, the strength increases, but it is not followed up by the intensity, giving off a not so balanced second part. A cigar that commemorates in a not so good way the 80th birthday of the most known, worldwide, cigar brand.

Compared to the cigars we tested during the Festival del Habano in 2015, when these cigars were announced officially,  the smoke is quite different and it performs definitely worst.