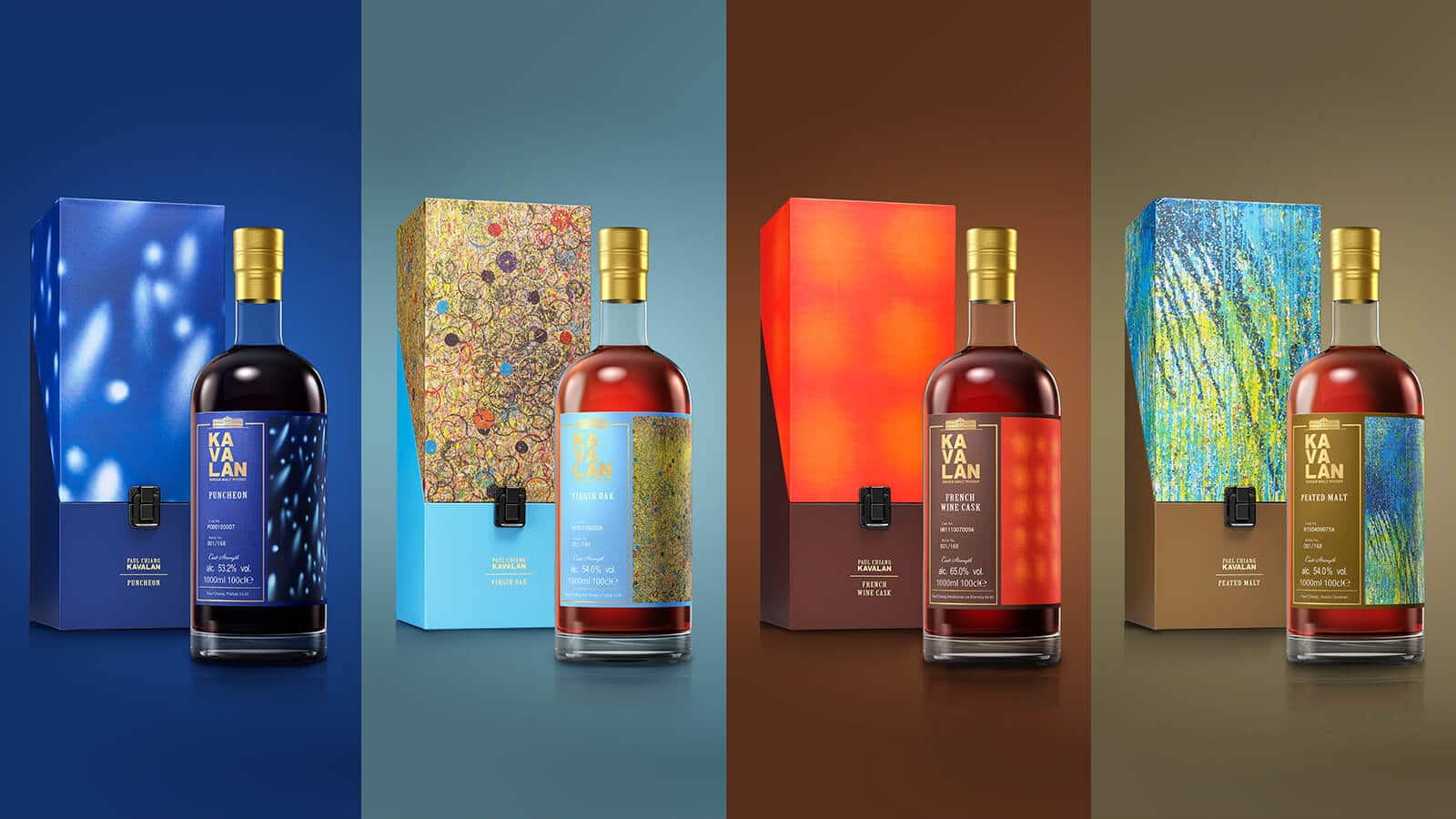 Kavalan Distillery and Master Artist Paul Chiang have collaborated to combine the powers of whisky and art. Kavalan launches the ‘Artists Series Collector Set’ which includes four limited edition bottlings with a silkscreen print by Paul Chiang. The inaugural release consists of four single-cask, cask-strength whisky bottlings named ‘Puncheon’, ‘Virgin Oak’, ‘French Wine Cask’, and ‘Peated Malt’. The names are inspired by the four elements, Ocean, Air, Sunlight, and Mother Earth, each of which plays an essential role in the creation of Kavalan whisky. A total of 198 collector sets will be released. Each set comes with four 700ml bottles. Each set includes either the silkscreen print “Pisilian” or the “Mountain Range of Taiwan.” Each print is signed and numbered by Paul Chiang.

Kavalan CEO Mr. YT Lee said “Each painting was a labor of love. Art, like whisky, has the power to stir deep emotion. But this takes decades of hard work and commitment to mastering your craft,” Mr. Lee said. “Take ‘Puncheon’, which depicts the sea, sky, and stars. Paul painted this work after returning to Taiwan after 30 years, settling on the coast in Taitung. You can feel the euphoria of that time and the beauty of rediscovery. We want to bring together great art and our rarest whisky to connoisseurs an expression of the finest artistry. We are honored to be collaborating with Paul on the inaugural edition.” 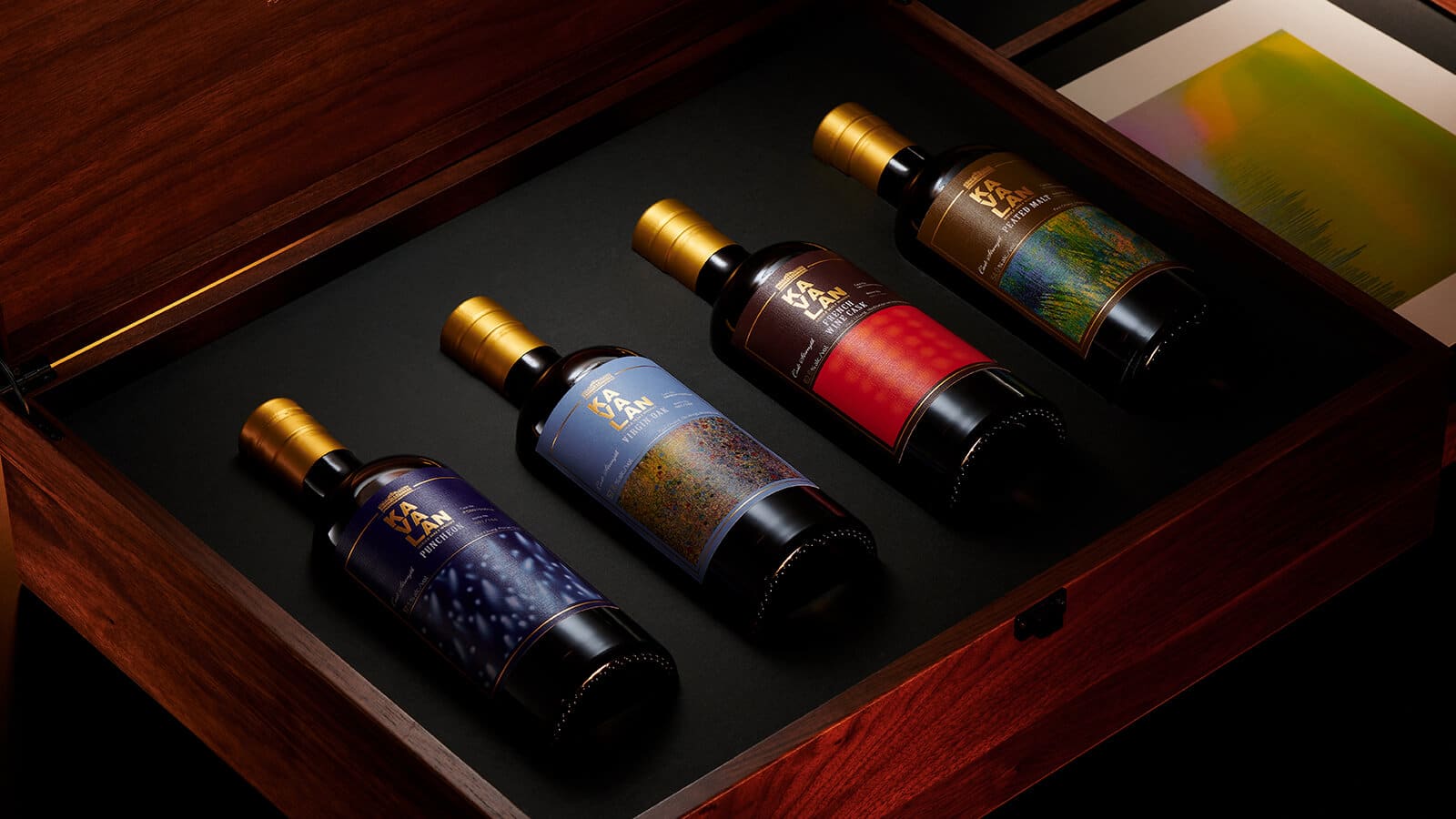 If you miss out on the four bottle collectors set, Kavalan is releasing 4,000 individual bottles. The non collectors set additional bottles are at the bigger 1,000ml size. Each bottle is in a collectors box with artwork on the outside.

The first is the “Puncheon.” The whisky is aged in Puncheon casks. Bottles come in at 50-63% ABV. The artwork on the collectors box is named “Pisilian” (Morning Stars over the Coast)

The “Virgin Oak” release gets its name from the virgin oak barrels. This whisky is also bottled at 50-63% ABV. The painting on the collectors box is named “On Wings of Song”

The “French Wine Cask” bottling, this whisky is matured in red wine barrels from the finest wineries in Bordeaux, France. The whisky again will vary between 50-63% ABV. The art piece on the collectors box is called “Meditation on Eternity”

The fourth version is called “Peated Malt” and gets its named from the deep mined peat used.  Kavalan’s unique Shave, Toast, and Rechar (STR) technique on the barrels, for a unique maturation. Like the others, comes in at a 50-63% ABV. The art on the bottles box is named “Jinzun/Summer”

The Kavalan Artist Series is now on sale across Taiwan. Individual bottles will be priced at an MRRP of NTD $12,000 each.