In the last few years many aficionados decided to keep cigars in jars, either glass or ceramic ones. The trend is likely fueled both by the latest caribbean productions (Cuba in particular) and by the choice of its national importers. It is easy to see that if this type of packaging is used for the sale, especially for the special or commemorative editions, probably suggests that the cigars will benefit from this type of storage, which is an almost century old tradition (the first Partagas jars were produced in the 20’s of the last century).

Leaving aside the historical aspect, we intend to dwell on the conservation in a jar as a type of storage, even when not specifically proposed by manufacturers or importers. Let’s start by saying that with these new systems you can get a very good humidification, whether the intention is to storage (ready for the smoke) or to age (in the long-term). There are few smokers who use the jars as humidor “low cost”, perhaps to test their cigar passion before investing money in a traditional humidor. Other smokers, however, although possessing efficient conservation systems, choose to store some cigars in retold containers of glass or ceramic. 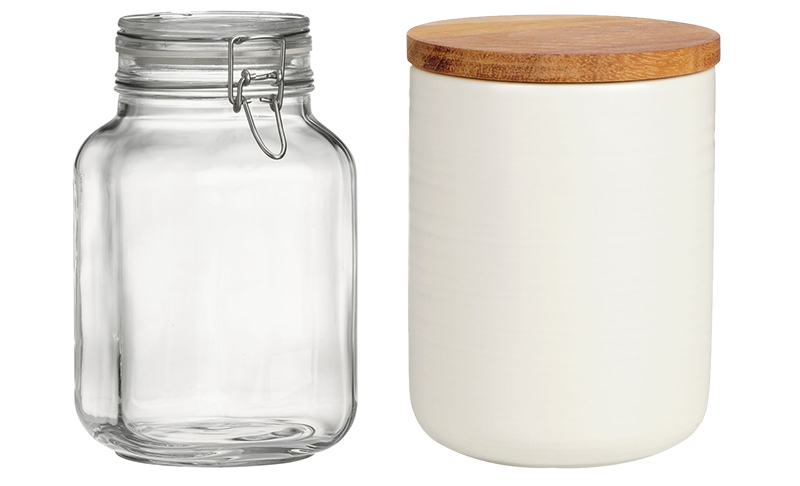 Hence the first question: glass or ceramic? Excluding propensities of satisfaction and strictly subjective equal tightness, the choice is irrelevant, as long as you keep in mind some simple rules. The glass is transparent, unlike the ceramic. That means that the light passing through it can change the color of the cigar wrapper and it can bring to biochemical internal environment distortions. We are not talking about the “greenhouse effect”, but the principle is roughly the same: the light penetrates in an airtight, heats the air, raises the internal humidity and air tightness continues to hold it inside the humidification system. This is why the advice, if you opted for a sealed glass jar (like those used in the kitchen to store pasta or other ingredients) is to shield it from light. Systems can be different, from the cheap silver foil, to the strips of cedar wood from the cigar boxes, properly shaped and placed inside the jar.

To choose the jar you need to take into account the preferred materials and dimensions (considerations prior to purchase: how many and what cigars you’re going to store), you must take care of the humidification system, keeping in mind that we are going to act on an airtight humidor, even more of the best on the market. This is why putting in our “low cost humidor” cigars properly humidified, won’t need to add anything else. However, just wanting to make an anonymous glass jar or ceramic our desired casket for the “everyday” smokes, exposes it to the need to open and close it several times, which means that it will be significant swings in humidity. Enter the classic sponge with a solution of water and propylene glycol can be very risky: if you do not check the amount of water drops that you put, you’ll have serious risk to over humidify the environment (with the classic problems that entails) .The optimal solution are control humidification systems such as the “Beads” or “Boveda”: they take up little space, they need little attention and they are self regulating and long lasting (the first are almost eternal, the latter last for a few months). 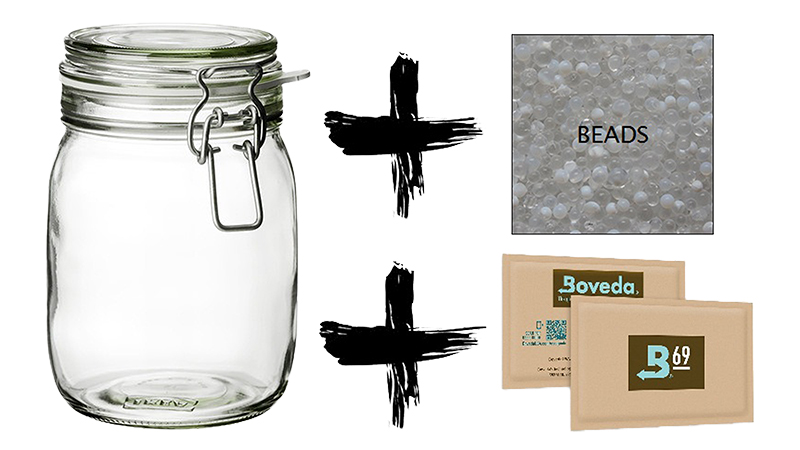 These devices, however, do not exclude the use of a digital hygrometer, which helps the verification of the moisture. It is important to place it in a well seen place, in order to control the humidity without opening the cover. That said, it  still remains something to know. Why choosing this way for storing/aging our cigars? First of all, removing the cigars from their original packaging changes the aromatic scents of a cigar, in particular for the Cubans, usually packed in boxes and wooden cabinets without the use of cellophane. This close contact means that the majority of Cuban cigars, in smoke, gives off marked aromas of wood. Well, if you choose to store them in a jar, after a few months the cigars will lose this characteristic aroma and, incredibly, they will develop new flavors, sometimes even more delicate, which was hidden by the woody perceptions.

The predominant characteristic that makes peculiar the conservation in the jar is the reduced oxygen exchange. Notoriously, the cigar is a “live” product that continues to improve and refine after several decades, if well kept. In view of the long life or of the aging, the different interaction of the cigar with the air can slow down or speed up the aging process of the product in the long run. The more the cigar lives the seasons (for example, in a static humidor), the more it ages fast, net of certain variables such as, first of all, that the quality of the tobaccos used. Conversely, the more the air exchange will be reduced, the longer will be the time to maturing/aging. The principle is the same technique of wrapping the box in a plastic wrap (usually used by collectors all over the world), or again, the answer to why some cigars are packed in painted cabinets.

For this reason, it is not unusual that those who possess advanced preservation tools opts for storing full box in a jar, in order to let it mature for a longer time. In the latter case, the use of a humidifier element becomes less necessary (be careful, not useless!), just because it is not needed to open the jar often. However, also in this case, although such systems do not require special care, the care of the smoker who intends to keep for a long time remains essential element for an excellent smoke in the future.

Regarding the humidity rates we, should distinguished them depending on whether one opts for storage or aging; always keep in mind the golden rule of sealing the jar. First, we advice you to follow your taste to smoke: the humidity you would keep in your humidor will go for the jar as well (relative humidity between 65% and 72%). If you want to experience a longterm aging instead (significant results not sooner than five years old, in the opinion of this writer, even decades, according to international collectors!) it would be good to keep the humidity rates relatively low, preferably not more than 65%. Paradoxically, in the process of aging in a jar, the temperature of conservation is not so important (just do not leave it in place with really high or low temperatures), but the low humidity, low oxygen supply, good sealing and control time to time are.