The Davidoff Royal Release Salomones belongs to Davidoff’s Royal Release line, relaunched in 2016 after a reinterpretation of the previous version’s blend. It represents the pinnacle of quality and craftsmanship of the famous Dominican brand. For this edition, only eight torcedores were used with at least fifteen years of cigar rolling experience. The Royal Release involves many different tobaccos, including a Dominican Aromatica wrapper, a leaf that is not used for any other Davidoff cigar. On the other hand, for the filler, in addition to the Ecuadorian Habano binder, the Dominican tobaccos used are Criollo Ligero, Hybrid Olor / Piloto Ligero, Piloto Ligero, Ligero San Vicente, Mejorado Visus San Vicente.

The Royal Release is offered only in two sizes: the Robusto and the Salomones (which, with its length of 210mm, would be almost a diadem). Both cigars are presented in elegant blue lacquered boxes of ten units, for a production of only 500 boxes for each reference. 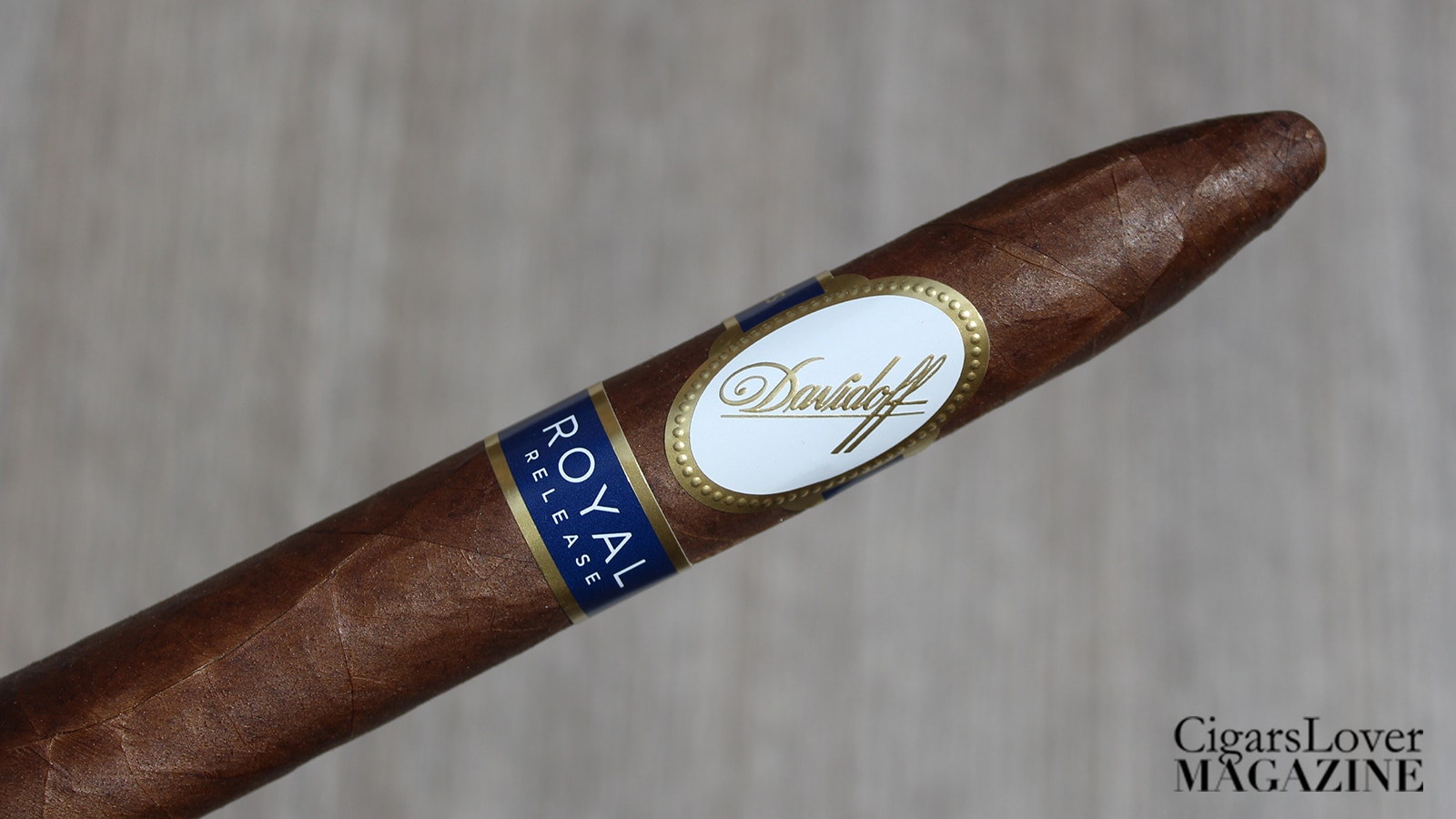 Upon visual examination, the Davidoff Royal Release Salomones’ wrapper is shiny, with a Colorado shade with brown reflections. It is very smooth to the touch, with no veins present. The Davidoff signature is already a guarantee of craftsmanship, and the construction of the Royal Release is perfection: a stretch wrapper, flawless closure of the head, uniform filling. The chromatic combination between the classic Davidoff ring and the blue and gold of the second band is captivating. 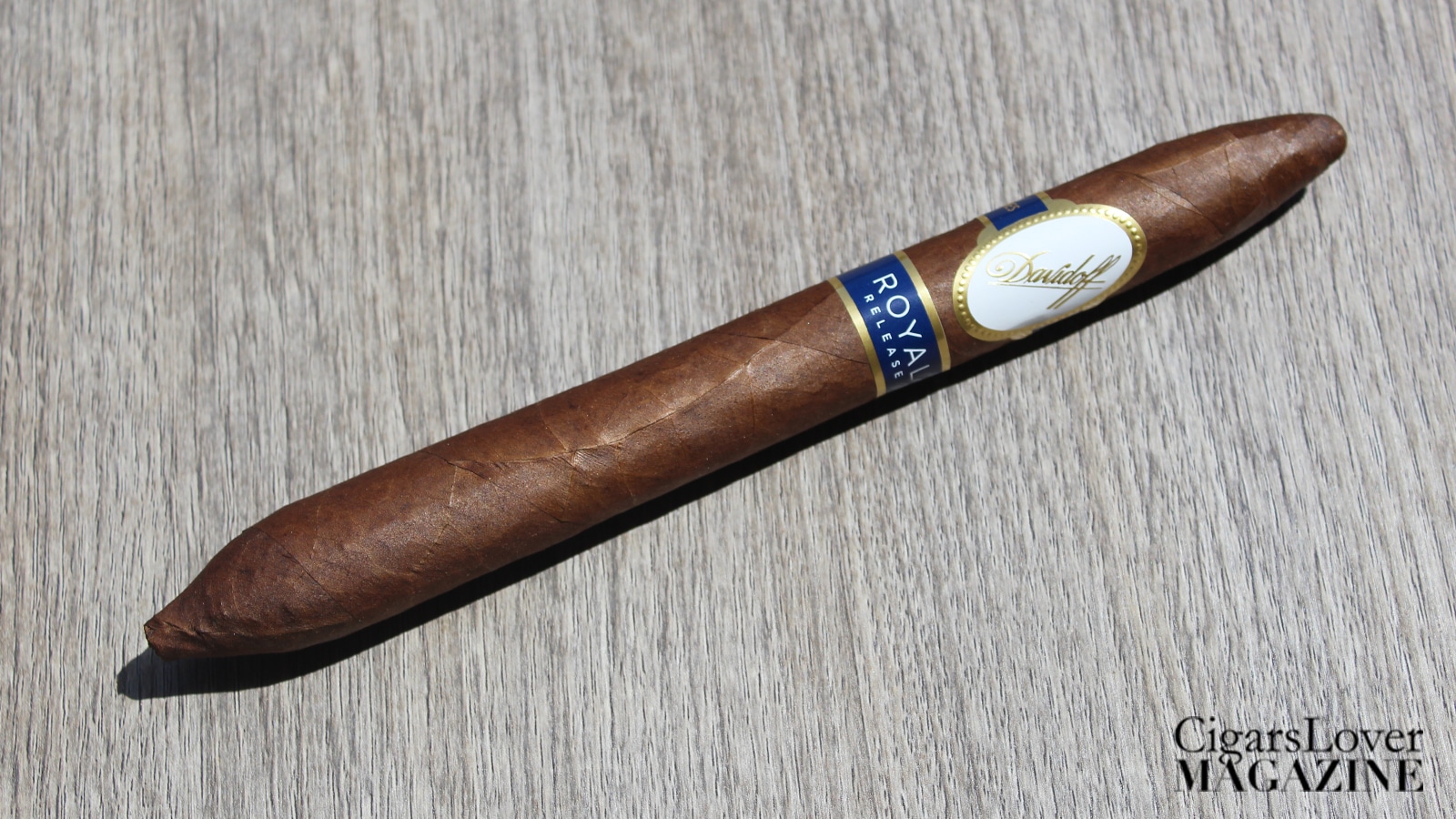 Davidoff Royal Release Salomones: the cold draw reveals light aromas of wood, earth, and dry flowers, all of equal intensity. The opening brings a very creamy smoke, delicately balanced between sweetness and sapidity, to the palate. 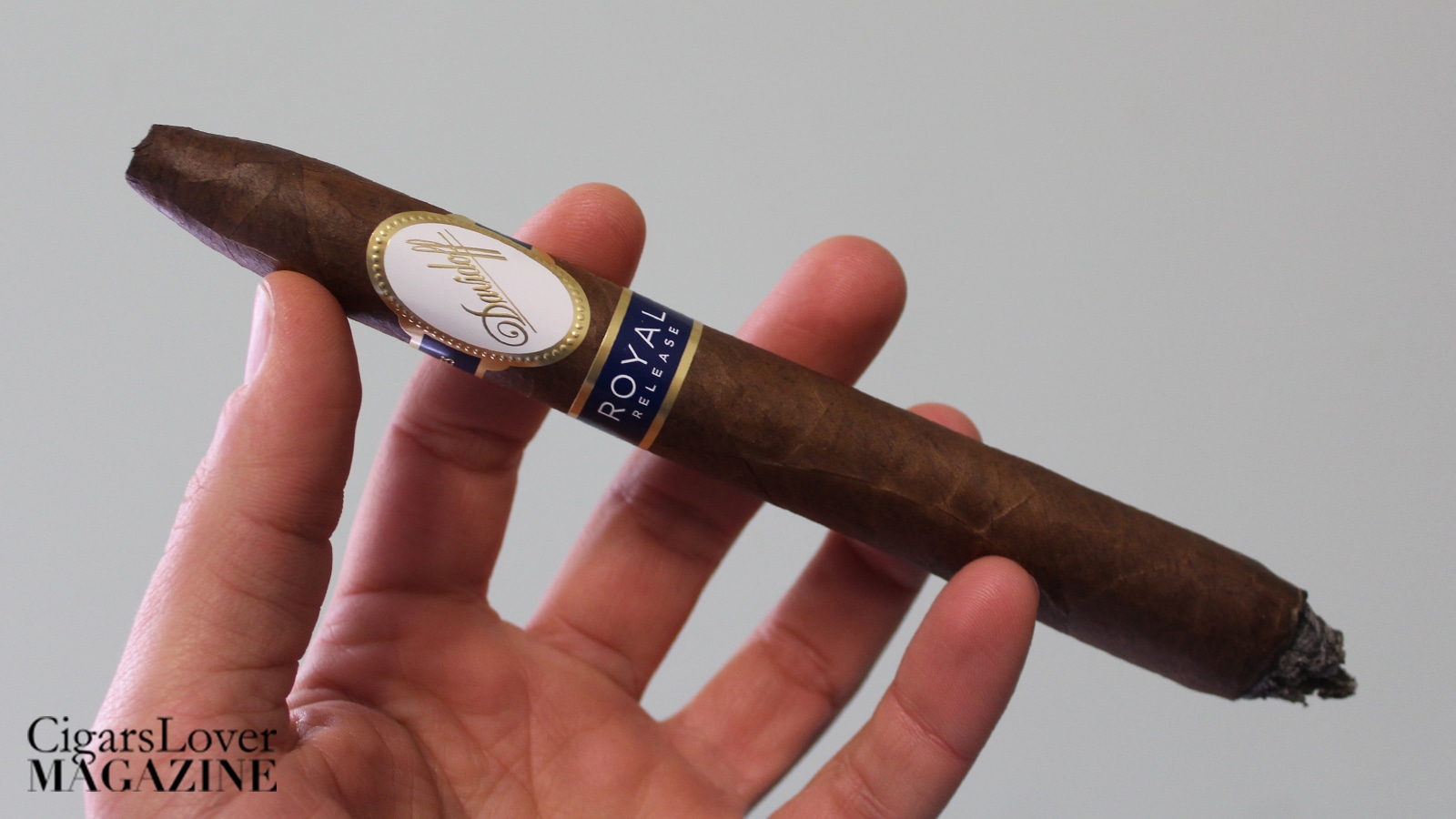 What is striking is the opening. While a Double Figurado usually takes a few minutes before it opens up, the aromas of this Salomones are perceived already at the first puff. Notes of coffee, good intensity, and nuts, more marked than the coffee come through. Continuing, fine wood components and spicy nuances are also added. Strength is medium-light (2/5).

In the central section, the sweetness gives way to the sapidity, which becomes more intense. The flavors evolve to notes of cellulose and mineral nuances. In addition, the fine wood note remains unchanged, and the spicy nuances are amplified compared to the previous third. Strength increases, becoming medium (3/5).

In the last third, the creaminess that is present throughout the entire smoke remains unchanged. The cigar confirms the notes of fine wood and mineral (which increases in intensity) with the addition of a pink pepper component. In the last few minutes, the nutty component returns with a vengeance. Strength remains unchanged (3/5).

Ultimately, the Davidoff Royal Release Salomones is a very complex smoke, suitable for refined palates. This time, the smoker’s wealth of experience will not be used to manage a complex size or a strong smoke but to grasp all the nuances of this true masterpiece of Davidoff’s production. The aromas are many and well defined but intertwine and alternate in a continuous kaleidoscope of flavors. In the mouth, the smoke is almost chewable. It is a product that you may like or not, but finding flaws is almost impossible.