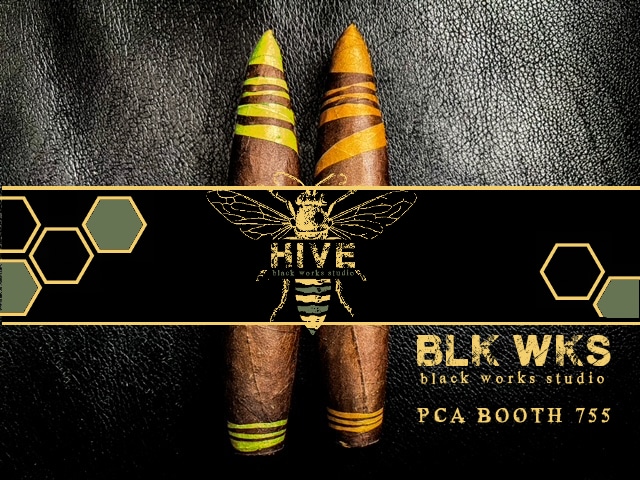 Black Label Trading Company (BLTC) and Black Works Studio (BLK WKS) have announced an exclusive cigar for this year’s PCA trade show.  Availability will be on a first-come, first-serve basis at the show. So, if you are attending the PCA, you should “Bee-line” over to their booth. The 2021 PCA show exclusive cigar is called the HIVE. The cigar follows the theme from the companies Killer Bee and Green Hornet releases.

James Brown, the creator of BLTC and partner at Fabrica Oveja Negra, said in the press release: “We wanted to offer Hive for PCA attendees as a way of showing our appreciation for the retailers who come to support our brands at the show. The HIVE is an idea I’ve had for a few years now. The Killer Bee & Green Hornet lines are some of our most popular, and over the years, I’ve played with many different ideas for both. HIVE is a mix of some of my favorite Bee & Hornet samples that have yet to be released. For anyone that is a fan of the Killer Bee & Green Hornet, this is a must-have!”

The HIVE is made in Nicaragua at the Fabrica Oveja Negra factory. Cigar wrappers will vary throughout the mixed 27-count box. Some wrappers will be an Ecuadorian Maduro with Candela. Others will use the Ecuadorian Maduro with a Connecticut wrapper. The binder on either variation will be a Honduras Habano. Filler tobacco is all Nicaraguan on either wrapper set up. The HIVE has an MSRP of $12.50 a cigar.

If you are attending the PCA, visit BLTC at Booth #755, or for more information, visit http://OvejaNegraCigars.com.